Posted March 01, 2013 By: The Office of Birmingham Specialists

After sitting on clinical trial data on their most advanced breast implant for the better part of a decade, the USFDA finally gave their blessing to Allergan Corp. to sell their “410” breast implant in the United States. This is a moment we have been waiting for a long time. As far back as 2005 we were telling patients that release of this device was imminent and if they were interested in using it for their breast cancer reconstruction or cosmetic procedure they should wait a little bit.

The 410 implant uses the most stiff or cohesive silicone gel polymer available in a breast implant and allows the implant to be anatomically shaped rather then round. The clinical data from these type of implants was amazing in that it virtually eliminates the risk of visible implant ripples and is almost impossible to rupture (as it’s a solid rather then liquid form).

Several issues with these types of implants exist, however:

1. They’re almost 30 to 40 percent more expensive then round silicone implants and almost 4 times the cost of a saline implant. This is a big premium you’re asking to use these devices for which there may not be a high demand. Quite frankly, if the cost does not come down this will be a very small niche device.

2. Shaped implants are not for all patients. They’re best employed on people with relatively small and nicely-shaped breasts. A larger breast or a breast with more loose skin or sage are likely best treated with round implants. In the right patients, however, they are fantastic and better looking than round implants.

3. These are firm implants, much more so than the shaped implant alternative from Sientra that’s available. Will that  firmness be a turn-off for patients? Apparently in the rest of the world it is, and these devices are used less for cosmetic cases than some alternatives (including some from Allergan, which are not going to be available here in the United States). It begs the question of whether the great clinical data they’ve shown demands the extra firm composition of the 410 or whether you can reproduce that with something a little  softer like the Sientra or Mentor devices.. We won’t know for a few years.

We’re eager to see how this device compares in practice to alternatives from Sientra (which have been available since last year) and Mentor Corp. (which has their own version of this type of device in FDA limbo). In their favor, they have (by far) the best and longest term data on their devices and that may be a compelling reason to command a premium price. The longevity and resistance to hardening they’ve shown for the 410 is going to make their competitors step up to the plate with their follow-up studies to prove equivalent outcomes. 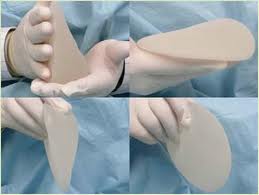